Heat transfer is the science which deals with the rates of exchanges of heat between hot and cold bodies called source and receiver.

There are three distinct ways in which heat may pass from a source to receiver. Although the most engineering applications are combination of two or three.

These are conduction; convection and radiation are the basic mechanism for the heat transfer.

When heat flows through a body by the transference of the momentum of individual atoms or molecules without mixing it is said to be flow of conduction.

I.e Conduction is the transfer heat through fixed material such as the stationary wall.

i.e Heat transfer by convection occurs in a fluid with another position due to gross movements of the mass fluid.

Convection can be further sub divided into free convection and forced convection.

It is very rarely that flow through fluids by pure conduction without some convection. The actual process of energy transfer from one fluid particle or molecule to another is still one of the conduction, but the energy may transfer ported from one point in space to another by the displacement of the fluid it self.

Radiation as a term given to transfer of energy through space by means of electromagnetic waves.

Let Area of wall “A“ thickness of wall  “Th”

Consider a heat flow by conduction and convection by pipe wall with forced convection of different magnitudes on both sides of the pipe as shown below figure. On the outside, heat is deposited by hot flowing liquid, and on the inside heat is received by a cold flowing liquid.

Either resistance can be measured independently by obtained the temperature difference between the pipe surface and the average temperature of the liquid. The heat transfer can be determined from the sensible heat change in either fluid over the length of the pipe in which the heat transfer occurs. 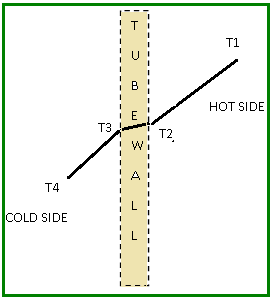 Designating the resistance the pipe inside by Ri and on the outside by Ro ,

Because of the complicated structure of turbulent flowing Stream and the impracticability of measuring thickness of the several layers and their temperatures are not considered.

Suppose take that Q Kcal/ hr are flowing from hot fluid to the cold fluid.

Then Q Kcal/hr passes from the hot fluid to metal and same pass in metal and then metal to cold fluid.

And average area of metal wall  “A” Now applying an expression for the steady state,

Replace the resistances by their reciprocals “ho” and “hi” respectively

The reciprocals of the heat transfer resistances have the dimensions of the Kcal / hr/m2/ oC or Kw/m2/ oC and are called individual film coefficients or surface coefficients.

The above equation can be written as

In above consideration case as consisting of three resistance in series.

First the resistance on the side of hot fluid (1/A ho).

Second the resistance of the metal wall   Th/KmA , and

Third, the resistance on the side of the cold fluid 1/A hi.

The overall resistance is equal to the sum of the individual resistance, just as is the case in the flow of electric current through a series of resistance.

I.e the above equation states that the overall heat transfer coefficient (OHTC) is product of the three factors.  But in typical OHTC calculation along the three factors also consider the resistances due scaling on both sides of tube. (dirt coefficient or fouling factor).