In this article we know about boiler efficiency meaning and formula for direct method of calculation. Also we practice with an example.

What is a boiler efficiency

Boiler Efficiency involves the ratio between energy output to energy input. It is a fraction of energy input that actually goes into raising steam.

The formula is as follows:

Energy output means heat exported or gained by the fluid of water, steam (Heat of the steam output in Kcal)

Amount of fuel fed to the boiler furnace in Kgs/hour and its gross calorific value in Kcal/kg.

Amount of water being fed by a pump to the boiler in kgs/hr or by keeping track of Steam output from the boiler every hour in kgs/hr which can be measured using steam flow meters. 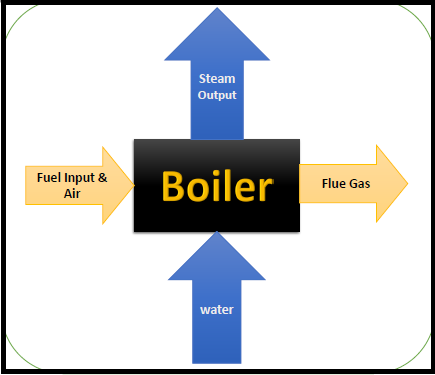 Generally, the efficiency of the boiler can be tested by the two  methods which are direct method and indirect method

The Direct method means, compares how much energy one gains from the working fluid of water and steam is with the total amount of energy contained within the fuel.

The direct method means, measure the efficiency at which energy is  input and energy is output

The direct method of the boiler efficiency is also known as “input-output method” because for this evaluation considering only the useful heat output i.e steam and the heat input (i.e. fuel).

The efficiency of the boiler can be measured in the indirect method is also easily by measuring all the losses occurring in the boilers using the principles to be described.

We use indirect method to overcome the disadvantages of the direct method. In this method we have to calculate the various heat losses associated with boiler.

The efficiency of boiler can be arrived at, by subtracting the heat loss in-terms of enthalpy from the total input fuel enthalpy.