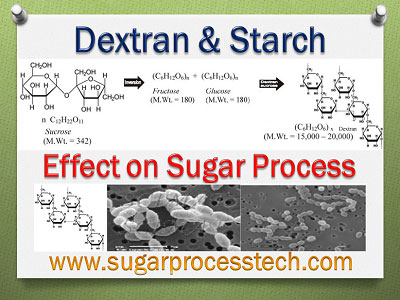 Dextran is the name assigned to a family of polysaccharides which is infrequently found in healthy sugarcane plant. Sucrose is biologically degraded into dextrose and levulose particularly by Leuconostoc mesenteroides which produces dextran sucrase enzyme to cause polymerization of dextrose into a polysaccharide called dextran.

Starch is a natural polysaccharide going into the process along with cane juice. Starch contains of a mixture of linear (amylose) and branched (amylopectin) structured components in a ratio of 20:80. Amylase and amylopectin both of which are polymers of glucose. Amylose is polymer of glucose units link together with α – 1 to 4 linkage. Amylopectin are highly branched polymer in which beaches occur at α – 1 to 6 linkages.

At the time of sugarcane harvesting in the field, Certain lactic-acid bacterias of Leuconostoc mesenteroides and Streptococcus mutans are attacks the exposed areas of the sugarcane and starts forming dextrans by utilizing the sucrose molecule. Under favorable temperature and humidity conditions, the dextransucrase hydrolysis the sucrose for the formation of dextrans. Prior to harvest or damage of sugarcane rind, dextran concentrations are almost zero or very low in the sugarcane. So dextran formation generally occurs after harvesting of cane.

The concentration of dextran in cane between cutting and crushing is a quantitative indicator of the processing of quality of that cane. The rate of dextran formation in manually cut burnt cane is high. The time gap between harvesting and crushing is having a significant role in dextran formation in cane. Also effect the climate conditions, Exposure to dirt and mud, burnt cane and billeted cane is more affected than whole stick cane. These dextrans are extracted in the sugar mill, along with the juices, and contaminate the sugar mill flow.

The origin of starch is from cane node which is propagates further. Starch is one of the essential molecule in sugarcane, which is extracted into juice during factory milling and plays a crucial role in sugar manufacturing process. This starch does eliminate in the clarification process, concentrates during process of evaporation and find its way to final molasses. In immature and cane the starch concentration is higher than in matured cane. Starch concentration depends upon various factors such as cane variety, growth condition/stage.

Effects of Dextran on Sugar Process

Generally, Dextran only becomes a problem when the dextran content of juice rises above about 2000 mg/kg on dry solids.

Dextrans are highly dextro rotatory with specific rotation values at least three times that sucrose & hence influences sucrose determination by polarization. However, the use of lead as a clarifying agent precipitates dextran so that its effect on the Pol reading is negligible.

The conversion of sucrose to dextran has a yield of about 25% so that every 0.01 per cent of dextran formed represents an unnecessary sugar loss of 0.04 percent.

So Approximately 4 parts of sucrose are consumed for every one part of dextran produced. Hence it is possible to construct a formula relating sucrose losses in juice Vs dextran content in sugar as mention as

Simply we can say that each 1000 ppm increase of dextran in the juice (i.e 0.1%), resulted in the loss of 4 kg of sugar per ton of sugar produced without considering the industrial recovery.

Some technologists studies at more advanced stages of the process showed that the purity of the final molasses increased by 1% by each 300 ppm of dextran in the syrup . Additionally it was shown that a 1 point rise in final molasses purity was equivalent to the loss of 0.454 kg of sugar per ton of sugar cane processed

b) Increase in viscosity: Presence of dextran and starch is responsible for high viscosity in intermediate products of process house

e) Poor purging at centrifugals: Due to highly viscous of massesuite along with needle shaped crystals, the purgability is drastically affected and requires more water application to get desired quality sugar, which results in higher purity of molasses.

It is widely reported that acid beverage floc is formed by the inter-reaction between a positively charged protein & a negatively charge polysaccharide.

h) Sugar drying : High level of dextran are is reported to make it more difficult to dry & condition refined sugar. Dextran is also known to cause sticky soft sugars, which are difficult to package

Effect of starch in sugar process

The starch level ranges from 0.001% to 0.1% on juice solids. Starch level of approximately 0.005% on cane may cause serious operation problems

a) Higher viscosity and starch content adversely affect the rate of setting and filtration. i.e reduce the capacity of plant
b) Starch content in syrup will adversely affect the rate of crystallization and increase the pan boiling time.
c) Due to higher starch content, more quantity of wash water is required during centrifugation i.e reduce the capacity of centrifugal and significantly increase power consumption at centrifugal.
d) Poor clarification and lower quality sugar and causes turbidity/floc the sugar solution hence limits uses in acid or alcoholic beverages

a) To be avoided the harvesting of immature or over-mature cane.

b) Good management of cane transporting to avoid time gap between harvesting and crushing.

c) Cleanliness is to be maintained in cane yard

d) Application of biocides at mills

e) Application of Enzymes Dextranase & Amylase  :  Dextran is a long chain polymeric compound which come in the system by polymerization and cannot dissolve by chemicals. However, under extremely favorable conditions of temperature and pH it may hydrolyse the Dextran into reducing sugars.

Dextranase is an enzyme and it is produced by the microbial strains, which under extremely favorable conditions of pH and temperature may hydrolyze Dextran into reducing sugars. Dextranase are classified in many groups such as dextran hydrolysis, glucodextranases, exoisomaltohydrolases, and branched-dextran exo-1,2- α -glucosidases.

There are mainly three favorable conditions for the activity of any enzyme or Dextranase.

Optimum temperature (in case of Dextranase it is 50 to 60oC)

Optimum pH (in case of Dextranase it is 5.2)

The time dependent stability of the enzyme.

Dosing pump is essential for uniform and perfect dosing of enzymes

Dextranase activity: The definitions of activity 1 IU dextranase is defined as the amount of enzyme which liberates 1 micro mol glucose equivalents/min under the described conditions.

Amylase : Amylase has a great deal of application in starch saccharification. Amylases are enzymes which hydrolyze starch molecules to give diverse smaller polymers composed of glucose units.