In this section, Fundamental concepts of CSTR ( Continuous Stirred Tank Reactor) or Anaerobic  Digester  like its terminology,  reactions involved in digester, design criteria and working operation and parameters.

The amount and nature of dissolved and undissolved matter present in liquid very greatly. In potable waters most of the matter is in dissolved form and consists mainly of inorganic salts and small amount of organic matter.

The amount of undissolved colloidal and suspended matter increases with pollution. Sludge represents extreme cases of pollution which most of the solid matter is undissolved.

Organic materials are decomposed biologically by various species of bacteria. Bacterial decomposition can occur without air in anaerobic digester.

This is directly sent to the boiler as fuel for steam generation. Also Biogas used for gas engine after removing H2S from biogas.

CSTR Digester consist of continuous stirred tank reactor where continuous mixing of effluent and biomass take place with the help of central and lateral agitators.

The essential feature of that the wash out of the active anaerobic bacterial biomass from the reactor is controlled by a sludge separator recycle system.  The basic idea underlying the anaerobic contact process is that;

Anaerobic digestion is performed by two groups of bacteria.

Basically three stages are involved in the process of anaerobic digestion

Hydrolysis: It is a process of  suspended organics and soluble organics of higher molecular weight  to simple organic molecule

Methanogenesis: Production of methane, primarily form acetic acid produced at the end of Acidogenesis process are converted into carbon dioxice and methane gases.

The process of conversion of acid into  carbon dioxice and methane gases is carried out by group of anerobic bacteria known as methane formers.

1 . Raw effluent is collected in a buffer tank and maintain the temperature around 38 to 42 oC. Some quantity of treated spent wash (Digeater outlet) also mixed in buffer tank to rise the pH.

2. From buffer tank raw spent wash feeded at top in a center shaft of digester

3. There will be one central agitator and two to 5 numbers of lateral agitators are available make uniform distribution of biomass and substrate for uniform degradation.

4. The effluent travels to the bottom and contact with active anaerobic culture in the reactor by the rotation of central agitator and lateral agitators.

5. The recirculated sludge also mixed with raw effluent in a central shaft of the digester

6. The treated spent wash collected through overflow pipe and passed through degassing tower for removal of dissolved gases to achieve better settling of sludge in further process.

7. Biogas collected at the top of the digester and will be stored in gasholder. Biogas from the biogas holder will be compressed and sent to boiler for burning.

8. Biogas also used for gas engine to generate power. Here H2S shall be removed from the biogas before using the gas engine.

As per the above Molecular Equation

Biogas generation in reactor = 0.53 ± 0.03 m3 of biogas produced from the one kg of COD reduced in effluent.

Volume of the CSTR digester 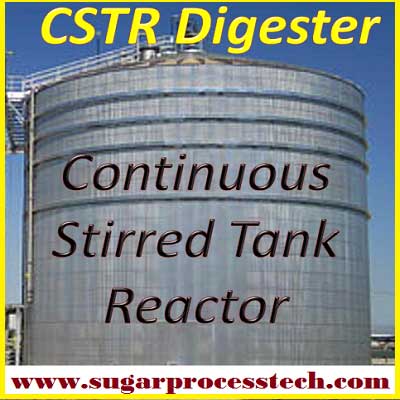 Thanks for reading this article “Concepts of Continuous Stirred Tank Reactor ( CSTR Digester )“. I Hope you liked it. Give feed back, comments and please share it.

Calculation of ethanol yield from intermediate Products of sugar process

In this article discussed about factors involved in affination process of standalone refinery with material balance calculation. Material...