The Ion Exchange Resin process (IER) are usually considered as similar to electrolytes. The IER were developed in the middle 1940’s and it is based on the co-polymerization of styrene cross-linked with divinylbenzene. 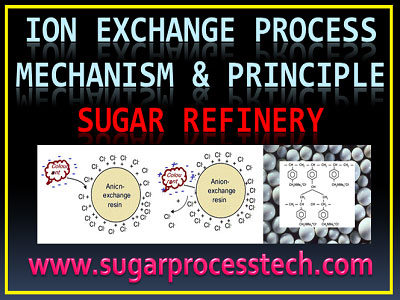 The IER system involves one ion for another, hold it temporarily, and then release it to a regenerate solution in regeneration process.

Cation-exchange resins are activated by negative functional groups such as sulfonates (- SO3H) or carboxyl (-COOH), and anion-exchange resins are activated by positive functional groups such as quaternary ammonium. The resin structure have been modified in many ways like macroreticular, or macroporous or Gel as per the specific applications and to meet the requirements. 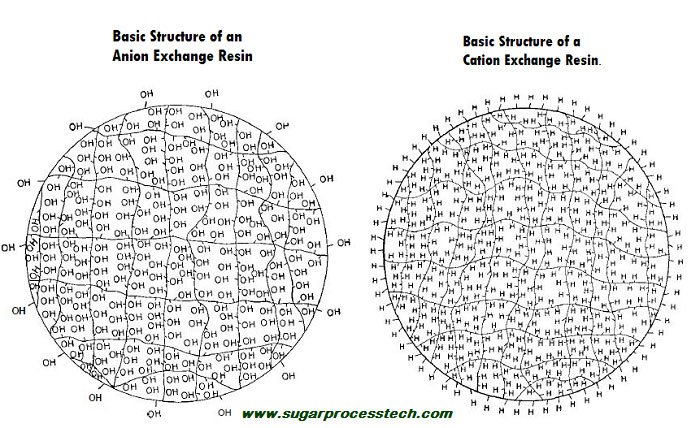 For a strong cationic -exchange resin

For a strong anionic-exchange resin,

Styrenic resins are able to remove colorants through ionic bonds with resin cationic active groups as well as hydrophobic by reactions with the resin matrix.

The Strong Acid Cation resin has a styrene-divinyl benzene matrix with  sulphonic acid functional group. The standard SAC resin has a divinyl benzene (DVB) content of 8%. Resins with divinyl benzene content below and above the standard are available for different applications. The resin matrix may have a gel or macroporous structure. The SAC resin exchanges all cations in water and is used in the softening, dealkalization and demineralization of water.

The Weak Acid Cation resin consists of polyacrylic acid – divinyl benzene matrix with carboxylic acid functionality and a gel structure. The WAC resin exchanges all cations associated with alkalinity in water and is noted for its high capacity for the divalent cations.  The resin is characterized by a high efficiency of regenerant utilization. The resin is used therefore primarily for the dealkalization of water.  It also finds use as a first stage in a demineralization train.

The Weak Base Anion resin has a styrene-divinylbenzene matrix with a macroporous structure and tertiary ammonium functionality. The WBA resin is noted for its high capacity for free mineral acidity and high efficiency of regeneration. The resin is used downstream of a SAC resin and ahead of a SBA resin in a demineralization scheme to bring about economy of operation.

This Ion-exchange technology was introduced into sugar process in the 1970’s and it is one of the best technology for melt decolorization in sugar refinery process.

Ion exchange reaction in between negatively charged colorants and hydrophobic interaction between the non polar colorants with adsorption inside the pores of the resin bed of colorants.

When in contact with a sugar melt solution to the ion-exchange resin reacts according to a simple acid-base chemical reaction.

In the sugar industry the resins used are strong base anion (SBA) exchange resins in the chloride form with a resin matrix  of two types either styrenic or acrylic. Because most of the sugar colorants are anionic in nature, being negatively charged at high pH. So strong base anionic resins are efficient decolorizers for sugar melt.

Microscopic view of a macroporous strong base anion resin 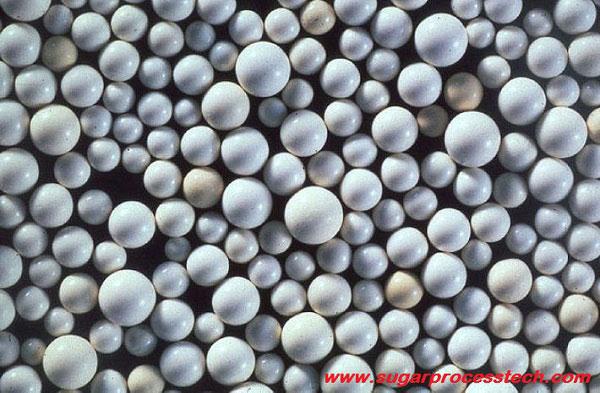 Color, Solids and Purity of Crystallization in Sugar Refinery Process

Material balance of three and half massecuite boiling  calculation