Cooling towers are a very important part of many process plants and power plants.  The make-up water source is used to refill water lost to evaporation.  Hot water from heat exchangers/condenser is sent to the cooling tower. After reducing the temperature of water in cooling tower and is sent back to the condenser /exchangers or to other units for further process. 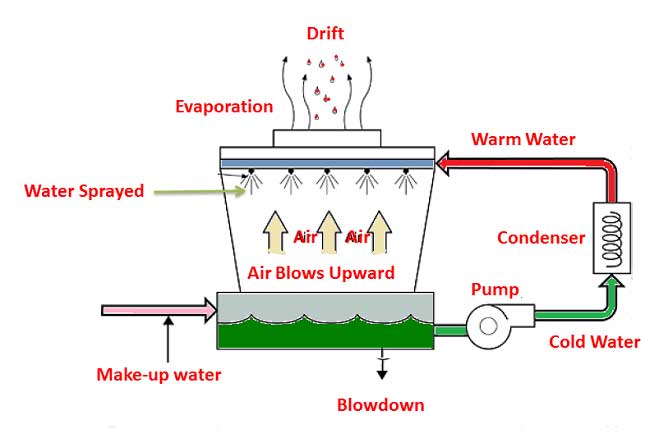 Drift: From a cooling tower water lost due to liquid droplets entrained in the exhaust air. It is independent of water lost by evaporation.

Heat exchange/ Condenser – It is a device for transferring heat from one substance to another.

Usually concentration of liquid in cooling tower occurs due to evaporation that cools the water. It is normally expressed directly as (parts per million) ppm or indirectly as mhos conductivity.

Air Blows: By the opening in cooling tower through which air enters a tower.

Blowdown: Water discharged from the system of cooling tower to control concentration of salts or other impurities in the circulating water

Evaporation loss: In the process of  cooling tower system, water evaporated from the circulating water into the atmosphere.

Drift eliminators: An assembly constructed of plastic, cement board, wood, or other material that minimize the entrained water moisture from the discharged air.

Exhaust air : The mixture of air and its associated vapor leaving the cooling tower system

Louvers : Members installed horizontally in a cooling tower wall to provide openings through which the air enters into the system while also containing the falling water within the tower. Usually Louvers are installed at an angle to the direction of air flow to the cooling tower.

Fundamental Concept of Cooling Tower :   Heat is transferred from water drops to the surrounding atmospheric air by the transfer of latent heat and sensible heat. 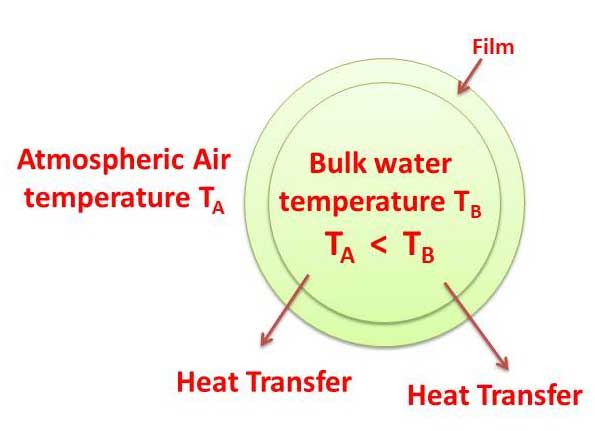 Mechanical draft cooling towers are more commonly used for cooling of water.  These mechanical draft cooling towers utilize large fans to force air through circulated water.   The water falls downward over surface of fills, which help increase the contact time between the air and water.  This helps maximize heat transfer between the air and water.

b) Induced draft – In this cooling tower fans located at the air exhaust.

These take the form of a large rectangular concrete structure. The water is pumped to the top and broken up into sprays. It falls as rain on to successive stages of boards in the form of louvres of wood, polystyrene or metal, with notches and ribs to break up the flow. The water flows from one stage to the next and finally arrives at the pond which forms the base of the structure, from which it is taken by the cold water pump. 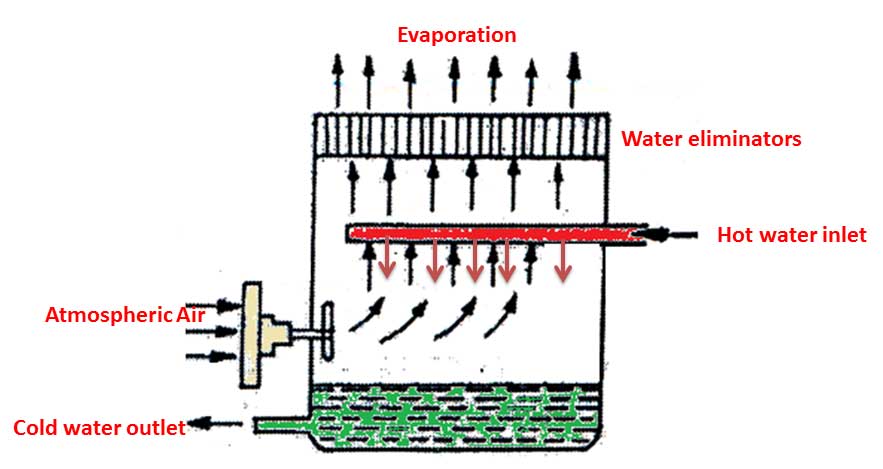 In an induced draught cooling tower, as shown in below figure. The circulation of air is provided by means of fans placed at the top of the tower.

They are generally induced draft cooling tower classified as counter current or cross flow tower, descriptive of the direction of air flows relative to that of the water.

The counter current tower is expected to be more efficient, but the cross flow tower can be operated with lower power requirement or higher vapour velocities. 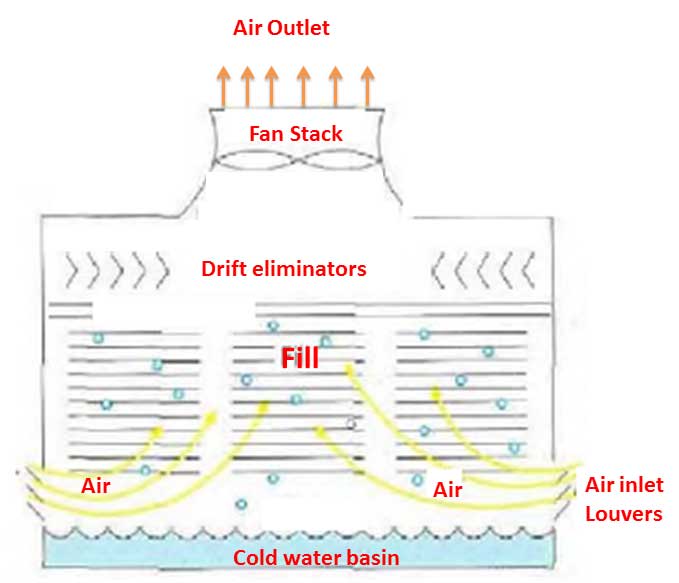 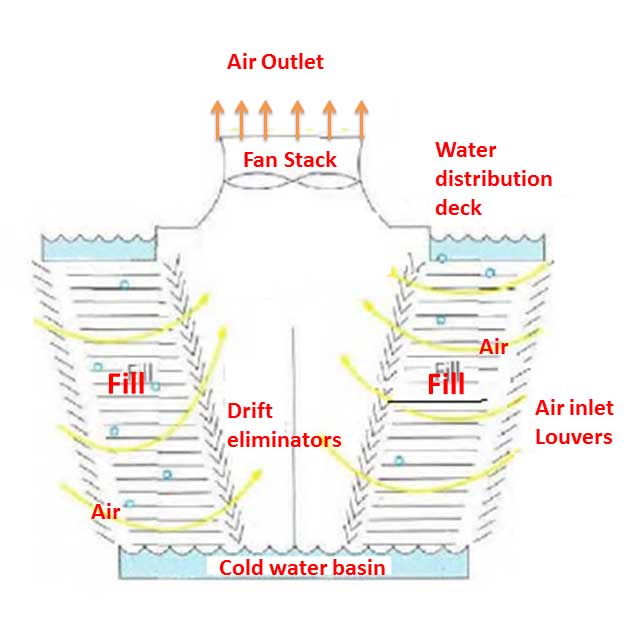 The cooling tower, generally packed with brushwood or wooden laths. This is a very large tower in which the hot water encounters a natural draught which promotes cooling of the water by convection and evaporation. 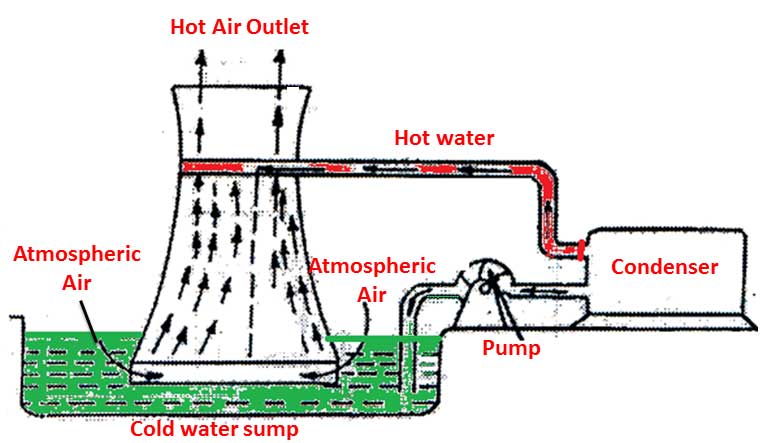 In a natural draught cooling tower, as shown in figure the circulation of air is produced by the pressure difference of air inside and outside the cooling tower

The efficiency of this device depends essentially on climatic conditions, in particular the wet-bulb temperature and the relative humidity of the ambient air.

The performance of cooling towers is estimated by approach and range. During the performance assessment, portable monitoring instruments are used to measure the following parameters:

a) Dry bulb temperature of air

b) Wet bulb temperature of air

Drift losses may be assumed to be:

( Hint: Theoretically the evaporation quantity for every 1,000,000 kCal heat rejected to evaporate 1.8 m3 of water)

Blowdown or Draw off

To control the Cycle of Concentration blow down or Draw off is given. Blowdown can be calculated from the formula

The cycle of concentration is a dimensionless number. It is a ratio between parameter in Cooling Water to the parameter in Makeup water. It can be calculated from any the following formulae.

The cycle of concentration (COC) normally varies from 3.0 to 7.0 depending on the Process Design and Manufactures Guidelines. In some large power plants, concentration cycles of the cooling tower may be much higher.

The efficiency of this cooling tower system depends on climatic conditions, in particular the wet-bulb temperature and the relative humidity of the ambient air. 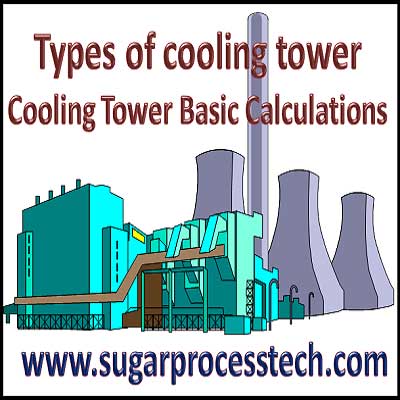 Condenser System for vacuum creations and its types with design criteria

Thanks for reading this article. I Hope it may fulfill your requirement regarding the ” Fundamental concepts of Cooling tower system”. Give feed back, comments and please don’t forget to share it