This Article summarizes the concepts of final molasses generation in process, Properties Molasses like viscosity, specific heat.Also discussed to overcome the issue of deterioration during storage. Molasses cooler design concepts and its water requirement calculation.

This combustion is due to the reaction of unstable organic substances (Originally produced by the action of lime upon the reducing sugar of cane during clarification ) with further quantities of reducing sugar in molasses which results in the formation of dark coloured colloidal impurities of high carbon content.

The deterioration of the molasses through the Maillard reactions leading to catastrophic consequences.

Maillard reactions can be summarized as:

The Maillard reactions are initiated/accelerated with higher temperatures during storage with the release of gases (mainly carbon dioxide) and foaming in the molasses tanks.

In case of certain factories when the low grade massecuite are boiled at a little high temperature. The certain ingredients of molasses are over heated & thus causing higher carbon content.

After centrifuge the the final molasses sent to storage tanks with high temperature means without cooling it.

The quality of the molasses in storage tanks should be regularly monitored with a check on the total reducing sugars. The deterioration of molasses due to chemical reactions during storage can be avoided by proper cooling of molasses to ambient temperatures prior to storage.  The molasses temperature (inlet) should below 45 oC

There must be throughout cold water recirculation arrangement around the wall of the tank  in day of summer season.

Viscosity of a Newtonian liquid

is measured as the ratio of shear stress to shear rate.

If a viscometer is used to measure the consistency of a non-Newtonian fluid, the relationship between shear stress and shear rate is the apparent viscosity.

The viscosity of the molasses, which depends on its temperature and purity.

The viscosity of molasses increases rapidly as its temperature decreases. It is approximately three times as high at 40°C as it is at 50°C.

Viscosity also increases with the proportion of air entrapped in the form of fine bubbles in the molasses. For example with 10% and 20% by volume of entrapped air, the viscosity may be respectively 15% and 50% higher than it would be in the absence of included air.

As per the Cane Sugar Engineering by Peter Rein –  The specific heat of molasses is typically about half that of water. And proposed the following equation

Where Cp = Specific heat of the molasses in KJ/kg/oC

This varies according to the dissolved solids content and the degree of aeration. It usually, a value between 1400 and 1450 kg/m3 when not aerated and @ 85 to 90 brix.

Heat transfer rates are high in plate type design when compare to shell and tube design. So plate type heater coolers are compact and relatively less expensive to install.

Moreover viscosity has a substantial effect on performance of plate type design. Due to high viscosity of molasses and pressure drops, plate type cooler is not a successful design for this application.

However some designers modified in plate patters of cooler to overcome the drawbacks of this system.

Shell and tube cooler for Molasses:

Shell and tube is one of the successful design for molasses cooling application.

Tubular cooler with water inside the tubes – In this design involves the flow of molasses over banks of small diameter tubes through which cooling water flows.

i.e Molasses passes through shell side of the heater and water flows through the tubes.

Generally, water side scale formation is high when compare to molasses side according to their properties so it will be the main advantage for proper cleaning.

Proper baffles arrangement in shell side is also important criteria for this type system.

But in this system heat transfer rates are low when compare to other type systems. Another drawback is pressure drops is higher.

Tubular cooler with molasses inside the tubes – In this design involves the flow of water over banks of small diameter tubes through which molasses flows.

This is a common design particularly when old juice heaters are available. Duplex type design will be the more effective solution for this type of design

Qm = Flow rate of the Molasses in T/hr

To = Molasses outlet temperature in 0C

Take One example for calculation

The correction factor is given by Kern

The equation for a one shell and two tube pass exchanger can be used for any exchanger with an even number of tube passes.

Now substitute the above values in this equation then

Now substitute values in the equation ( 2) then 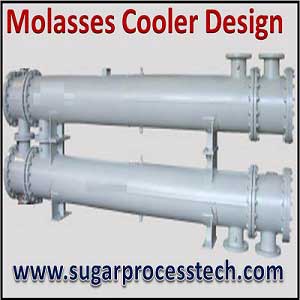 Hi friends Thanks for reading this article “Molasses cooler concepts”.  I Hope you liked it. Give feed back, comments and please share it.