a) The objective of these processes is to remove the impurities that cause turbidity in raw melt liquor.

b) Carbonation is generally applied to melt liquor in the refinery ahead of any decolourising process.

c) Carbonation has a good effect on sugar liquors. It is also purification process, enabling a colour reduction of about 40% to 50% together with a reduction in ash content of about 20-25%.

e) These impurities are subsequently removed in the succeeding filtration process.

b) The first step involves the formation of a voluminous and gelatinous precipitate by reaction of calcium and CO2.

c) The second step involves the conditioning of the precipitate in order to improve its filterability.

d) The impurities are both absorbed by, and enmeshed in, the conglomerated particles of the calcium carbonate precipitated by the reaction of the carbon dioxide and calcium hydroxide.

e) This calcium carbonate entraps wax, gums, polysaccharides, colorants and ash and also destroys the invert sugars. This precipitate that contains most of the impurities from the sugar solution is removed in the process in the succeeding filtration processes.

a) The process consists of adding slurry of calcium hydroxide into the raw melt solution in liming tank to increase the pH to 10.5 – 11.

b) Liming tank is equipped with agitator to keep the liquor and lime solution mixture in suspension and for better mixing.

d) The limed liquor from the liming tank flows transfer to first carbonator tank where scrubbed Carbon Dioxide gas drawn from Boiler flue gas after dilution is admitted to react with lime in the limed liquor to form calcium carbonate.

e) The CO2 addition will be controlled according to the carbonated liquor pH.

f) In 1st carbonated liquor tank pH maintained about 9.5 – 9.6 and amount of 75 -85 % of carbon dioxide gassing is carried out in the first carbonator tank.

i) Each carbonator is equipped with Richard tubes for better mixing of CO2 with the liquor and facilitates the on line cleaning of nozzles and avoids jamming, which results better colour reduction in the carbonation system.

j) Boiler flue gas is used as source of CO2 requirement for this carbonation process and the concentration CO2 gas is about 12-14% in scrubbed flue gases.

k) The carbonated liquor heated to 850C in tubular heaters and filtered in Membrane pressure filters to separate the calcium carbonated precipitate from liquor.

l) Clarified melt from the carbonation system will be subjected to 2nd decolonization process. 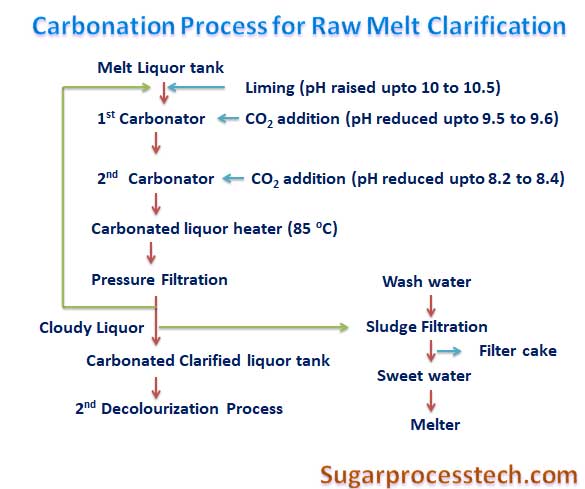 a) Liming tank with stirrer and located adjacent to the top of the 1st carbonators are provided to ensure more uniform and thorough mixing of raw liquor and milk of lime.

c) The ratio of raw liquor and milk of lime can be adjusted to obtain the desired pH.

d) pH sensor is also installed on the limed liquor sampling box to measure the actual pH of the lime liquor leaving the Liming tank.

a) Carbonator is also called saturator or reactor

b) Total liquid volume contained in the both saturators is generally sized to give an overall residence time of liquor in the system of about 1 hour.

c) Longer residence times in reactor generally give higher color removal and better maturity level of precipitate for filterability, but above 1 hour the benefit is much reduced, and losses of reducing sugars are increased.

d) Normal liquor retention time of 30-40 minutes will be maintained in each carbonation tanks depend upon the requirement.

e) Liquid height in the saturator vessel is normally limited according to head the CO2 gas pumps. Generally limited to about 2.5 m.

f) The gas distribution system shall be distribute the gas uniformly over the cross-sectional area of the saturator, produce a large number of small bubbles and ensure sufficient agitation in the vessel.

g) The right degree of mixing is obtained with superficial gas velocities in the range 10 to 15 which should be considered in assessing the geometry of the saturator vessels.

a) Boilers flue gas is one of the major sources for gas production for this process.

ii) Bagasse firing boilers having around 12 to 14%

iii) Gas firing boilers having around 7 to 8%

e) Materials of construction of scrubber system need to be chosen to withstand corrosive conditions if the flue gas contains SO2.

f) Most of the sulphur dioxide is removed in the first scrubber, but the soda ash wash is necessary to protect the pipes and gas pumps from excessive corrosion.

g) Boilers flue gas is one of the major sources for gas production for this process.

a) The separation of precipitated calcium carbonate impurities from carbonatated liquors is prime importance factor to get quality of liquor in Carbonation process.

b) Filterability of liquor is depends on the maturity and crystals grown of calcium carbonate precipitate.

c) In global terms, an installed filter area requirement of 15 m2 of filtering area per tonne of melt per hour is required.

d) In terms of volumetric flow rate, generally 0.1 m2/m3 will be acceptable.

g) The cloudy filtrate from first filtration stage is sent back to the lime melt. This is a common practice in carbonatation, and is considered to improve the nucleation of the CaCO3 precipitate.

h) De-sweeting of carbonated mud is important that a high recovery of sugar from the cake be achieved, to maximize refinery yield.

The major disadvantage of this system is the fact that high pH levels lead to a certain degree of destruction of invert sugars (monosaccharides). The breakdown products are generally organic acids, which require more lime in neutralization and increase the ash in the final molasses, thereby increasing the loss of sugar in molasses. 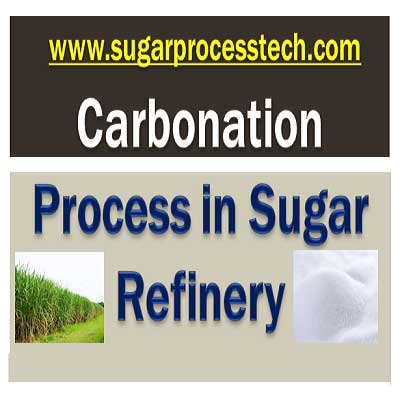 In this article discussed about factors involved in affination process of standalone refinery with material balance calculation. Material...

Sugar Plant Milling vs Diffuser process | Why Milling is favored over cane or bagasse diffuser  There are two methods of cane juice...

In this session discuss about fundamental concepts of anaerobic treatment system  with chemical reactions for industrial waste water...